This event has passed.

Start your weekend off in fine tune with a laid back of evening of jazz to enjoy with friends, drinks and maybe something to eat.

Pianist and singer Wendy Kirkland has been a mainstay of the UK Jazz scene since the late noughties, but it was her first album, Piano Divas, released in 2017 that began her ascent to wider recognition as a “Singing Pianist”, as dubbed by Jazz Journal. The ability to sing at the same time as comping and craft solos on the piano or unison piano/voice scat lines is her forte, with influences such as Diana Krall, Eliane Elias and Dena DeRose. Further accolades were given for her 2019 release The Music’s On Me, dubbed “a huge leap forward” by Jazz Views. Both albums prompted ACE funded tours all over the UK and constant radio airplay ever since.

During lockdown from March 2020, Wendy and guitarist/bassist husband Pat Sprakes entertained with a daily dose of Latin American music on Facebook which they entitled Latin Lockdowns. After 86 such performances they decided it was time to move on to other musical endeavours, but were amazed and pleased to receive daily messages from people who described the videos in such terms as “a ray of sunshine” in their lockdown situations. 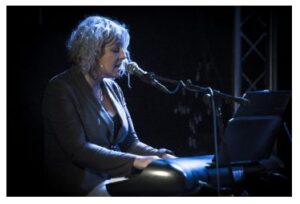