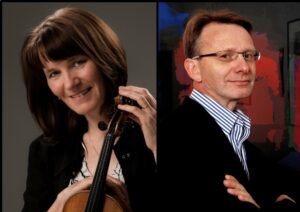 Christine Townsend studied violin at the Royal Academy of Music and went on to pursue a career as a chamber musician and principal orchestral player with the London Philharmonic & City of Birmingham Orchestras.

Stephen Robbings also studied piano at the Royal Academy of Music and won the Academy’s highest award for pianists. He has performed at major venues in the UK, also travelling to Europe, The Far East and the USA & played on BBC Radio & TV. Their CD features music by Elgar, Prokofiev & Debussy.  They have played at the Launde Abbey Classical Concerts several times, and  their wide choice of music makes it a popular afternoon!

Don’t miss what will be a very special concert!  You are advised to book early.

Launde Classical Concerts offer the chance to hear an hour-long live concert in the company of some of the country’s leading performers, followed by a gorgeous Launde cream tea.